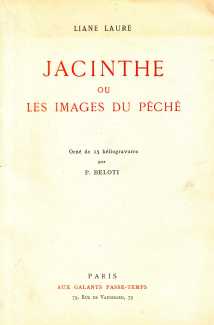 Jacinthe, ou les images de péché (Jacinthe, or the Images of Sin) is a fairly typical account of a girl’s initiation into spanking while at a particularly disciplinarian girls’s school. Wriiten by Liane Lauré, possibly the pen name of a woman whose real name was Donville and who also wrote under the pseudonyms Liane Delorys, Liane de Lorys, Liane de Lauris and Lucette de Chatay, this is the only volume which specifically names Beloti as the illustrator, whose signature accompanies the drawings.

It was published by the master of the spanking oeuvre, Jean Fort, under his Aux Galants Passe-temps imprint, and reissued by Editions de l’Eden in 1950 under the title Image du péché, whereupon it was promptly prosecuted and banned, which only improved sales.