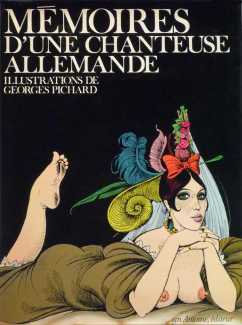 The first French edition, without illustrations, was published by the Bibliothèque des Curieux in 1913, with an appreciative introduction by the poet Guillaume Apollinaire; two further editions followed in 1933 and 1947.

The Pichard-illustrated edition, like Trois filles de leur mère, takes the extremes of an extreme text to even greater extremes, concentrating on the wilder reaches of Volume Two. Unusually for Pichard, Mémoires d’une chanteuse allemande includes a large number of simple line drawings in addition to the detailed full-page illustrations; they show him to be a master of this format.