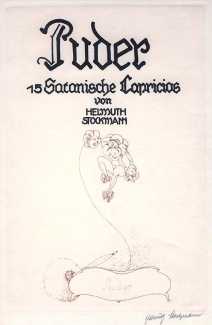 Puder: Fünfzehn Satanische Capricios (Powder: Fifteen Satanic Capricios) was produced as a portfolio at the end of 1918, and within weeks had been banned by the conservative Landgericht (District Court) of Berlin, who ordered the (fortunately small) remainder of the 410 printed copies to be destroyed.

The portfolio was printed by the well-known and respected Berlin-based gravure and photographic art establishment of Carl Sabo, which also produced several portfolios for the group of expressionist artists formed in Dresden in 1905 who called themselves Die Brücke (The Bridge). Die Brücke is sometimes compared with the roughly contemporary French group, the Fauves, both movements sharing an interests in primitivist art and seemingly crude drawing technique. Die Brücke artists’ emotionally-agitated paintings of city streets and sexually charged events often made their French counterparts seem tame by comparison. Stockmann would certainly have known the work of artists like Kirchner, with whom Puder shares risqué similarities.

As with English ‘powder’, ‘Puder’ in German can mean both a cosmetic and an explosive, so Stockmann’s title is doubly descriptive, the twelve prints taking us from birth to death via a series of potentially explosive incidents. We shall never know how much his work was affected by his wartime experiences, but it is surely no coincidence that the turbulent war years had such a strong influence.