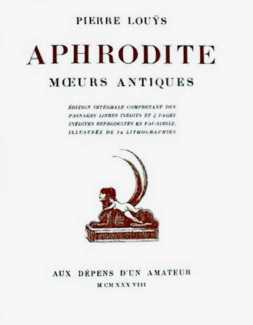 Aphrodite: mœurs antiques (Aphrodite: Ancient Morals) was the highly popular 1896 novel that brought Pierre Louÿs to wide public attention. It tells the story of Chrysis, a courtesan, and the sculptor Démétrios, and is the classic theme of spurned love which turns into obsession and punishment, with the underlying message of the limits of mortality. Louÿs originally intended his novel to be published in a limited edition for his friends, but a glowing review by François Coppée in the Mercure de France, helped to no small extent by the libertine scenes scattered throughout the book, turned Aphrodite into a bestseller.

As well as illustrating actual scenes from Louÿs’ bestseller, Villa added a number of his own imagining, making this edition, published ‘Aus depèns d’un amateur’ (at the expense of a presumably deep-pocketed collector), probably the most explicit ever produced. The skilful use of lithography together with a restrained colour palette creates a lively sense of imagined classical revelries.

The Villa-illustrated Aphrodite was produced in a limited numbered edition of 200 copies.

We are grateful to Karen Nadine for these illustrations; Karen’s website, Vintage Fetish Art, is well worth visiting, and can be found here.