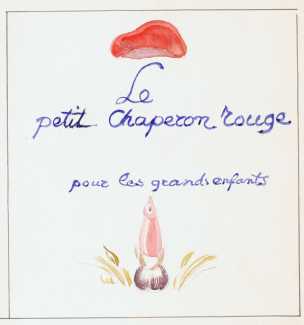 Le petit chaperon rouge (Little Red Riding Hood) is one of the best-known European fairy tales, its origins traceable to the tenth century. The best known versions are that of Charles Perrault, written in the 1690s, and the Brothers Grimm’s 1812 Rotkäppchen.

Rojan’s portfolio is subtitled ‘Pour les grands enfants’ (for big children), making it clear that the tale has very grown-up overtones. He suggests that far from being a victim, Little Red Riding Hood is a young woman with a wild nature not unlike the wolf’s. Girl and wolf appear to be consensual partners in an exploration which they are both clearly enjoying – it can be read as a story of female empowerment and rite of passage.

Sexual analysis of Little Red Riding Hood has sometimes been given negative connotations in terms of rape or abduction. In Against Our Will (1975), Susan Brownmiller describes the tale as a description of rape; however, many revisionist retellings choose to focus on empowerment, and depict Little Red Riding Hood successfully defending herself against the wolf. Possibly most notably, Little Red Riding Hood appears in Angela Carter’s short story ‘The Company of Wolves’, published in The Bloody Chamber (1979), a collection of dark, feminist fables filled with bestial and ferocious heroines. In her version of the classic, Carter examines female lust, which is healthy, challenging, and sometimes disturbing.

Rojan’s Le petit chaperon rouge appears to have been a private commission. As well as the series of twelve coloured pencil drawings, he also made several preliminary sketches and a larger watercolour painting on the same subject.