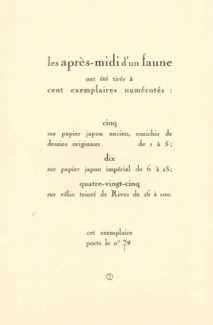 Produced at the height of his popularity, Domergue’s L’après-midi d’un faune (The Afternoon of a Faun) provides a unique glimpse into his studio and into his erotic imagination. Most will know the title from the composer Claude Debussy’s famous Prélude à l'après-midi d'un faune, but the original inspiration is the Stéphane Mallarmé’s 1876 poem, which describes the sensual experiences of a faun who has just woken up from his afternoon sleep and his encounters with a variety of nymphs. It is Mallarmé's best-known work, and a landmark in the history of symbolism in French literature. Paul Valéry considered it to be the greatest poem in French literature.

It is not hard to see why both subject matter and title appealed to Domergue when it came to putting together a portfolio of images of women (and the occasional faun) that he would probably not want most of his clients to know about. Probably created during the long languid summers spent in the Villa Fiesole in Cannes, many of these engravings (and these are among the very few engravings that Domergue created) give us a sense of real women rather than the impossibly slim, long-necked interpretations of most of his paintings.

How much this very explicit portfolio tells us about Jean-Gabriel’s personal life, six years into his marriage and sharing a seaside villa with a bevy of beautiful models, is impossible to know, but if drawn from life as most of his etchings clearly are, then he was certainly enjoying being surrounded by such sensual beauty.

Domergue’s L’après-midi d’un faune was privately published in Paris in a limited numbered edition of 100 copies.