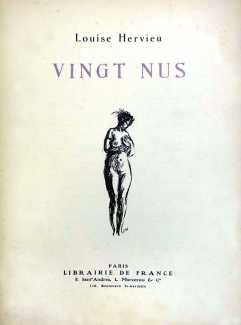 Vingt nus (Twenty Nudes), a portfolio of aquatints, was published a few years after the Hervieu-illustrated editions of Baudelaire, and give us a strong clue as to her artistic technique and her subject matter during the early 1920s.

The technique demonstrated, aquatint, is a variant of etching that produces areas of tone rather than lines. By the 1920s the technique, famously used by Goya and John James Audobon among others, had largely been superseded by lithography, but it was perfect for Hervieu’s naked women in romantic interiors illuminated by the mysterious light enveloping the forms, and the tragic, painful, deeply lyrical atmosphere emanating from her compositions.

And her naked women are far from the studio nudes so popular in polite circles of the period. These are strong, self-assured women, clearly drawn from life. Shadows and light give the backgrounds the same importance as the bodies and faces, the interiors filled with rich hangings, plump velvets and baroque furniture. As the art critic Louis Vauxcelles (incidentally credited with coining the terms Fauvism and Cubism) wrote of her work in 1943, ‘Hervieu doesn’t care about fashion, she draws because drawing is the intimate reason for being and for breathing. A deep sensuality throbs in her work; her drawings live.’

Two of the images – ‘Le beau crime’ (The Perfect Crime) and ‘La maraudeuse’ (The Marauder) – include a suspicious male character, while a skull commemorates Baudelaire. Four more feature two naked women – ‘Les demones’ (The Demons), ‘Confidences’, ‘Le lit antique’ (The Antique Bed), and, most touchingly, ‘Les adieux à l’amie’ (Farewells to a Friend). This last bears more than a passing similarity to a colour wash sketch of two women from the mid-1920s entitled ‘Deux lesbiennes’ (Two Lesbians), which along with the Vingt nus portfolio bears testament to Hervieu’s deep respect for intimate female relationships.

Vingt nus was published by the Librairie de France in a limited numbered edition of 100 copies.