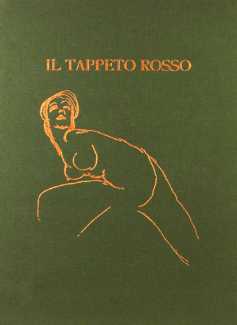 Il Tappeto Rosso (The Red Carpet) is an interesting portfolio, published by the Bologna art publisher Sintesi in the mid-1990s. The minimal text is by the cultural and food historian Alberto Capatti, and the title page explains that the twelve coloured plates are by ‘a twentieth century master’. Thus there is no conclusive proof that these twelve images, linked as they are by the inclusion in all of them of the eponymous red carpet, are in fact by Marcello Dudovich, even though several knowledgeable sources suggest that they are by his hand.

Though appearing in 1995, the images clearly bear every sign of having been produced much earlier. In relation to Dudovich’s known work from the 1940s and 50s, they share many characteristics with his drawings from that period, so if the Tappeto Rosso sequence is by Dudovich then they probably date from the late 40s. Each of the twelve scenes takes place in a space framed by the carpet, and most of them also feature the large dark brown bedhead, lending a uniformity to this accomplished portfolio. 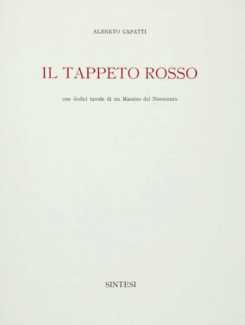 Il Tappeto Rosso was produced in a limited numbered edition of 112 copies.