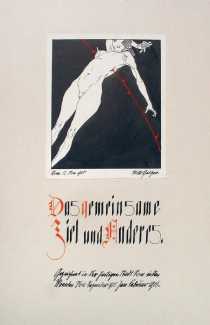 The title conveys much of Geiger’s thinking as he created the highly original prints for Das gemeinsame Ziel, ‘gemeinsame’ conveying the shared responsibility of and for intimacy, while as well as goal ‘Ziel’ can be interpreted as its target, objective, or destination. There is much to take in with each print, the accompanying jagged calligraphy providing a clue to its interpretation.

The prints were created in Rome between December 1905 and February 1906. A small folio edition was printed in Rome in 1906, followed by a larger loose portfolio in Leipzig in 1907; each print run was of just one hundred. When the large-paper version appeared it was almost immediately confiscated by the Reichsgericht and destroyed; Geiger believed that only four copies had escaped their attention. Fortunately the original prints for the portfolio survived, given to Geiger’s friend the poet Max Dauthenday for safekeeping.

The text below each of the plates is as follows: