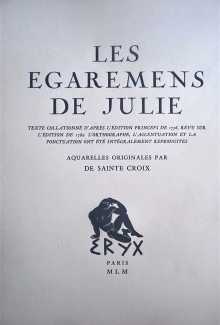 Les égaremens de Julie (Julie’s Distractions) is a rather minor and second-rate example of the supposed memoirs of a young eighteenth-century woman who sets off to explore the pleasures of the flesh.

Les égaremens de Julie was published in three small volumes, supposedly in London but actually in Paris; at that time such books were less likely to be prosecuted if they bore a non-French place of publication.

As with his colourful illustrations for Le journal d’une femme de chambre, Sainte-Croix’s images for Julie are bright and full of life.

Les égaremens de Julie was published by Éditions Eryx in a limited numbered edition of 685 copies.