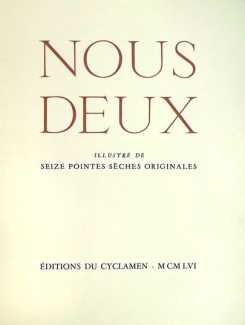 When the two illustrated volumes of Nous deux, a fictional amorous correspondence between student Nelly and her teacher Jean, first appeared in 1929, they included no indication as to who had written it, who had illustrated it, and where and when it had been published. Though both author and illustrator were unmentioned, it quickly became clear among those in the know that the author was art critic and ceramics expert Marcel Valotaire, and the illustrator the talented young artist Jean Dulac. You can see the Dulac illustrations here.

Written in the form of letters and diary entries, Nous deux follows the growing sexual attraction between young Nelly and her almost-as-equally-young Latin teacher Jean, and is written in a direct and entirely believable style which is in many ways just as approachable now as it was in 1920s Paris.

No other edition of Nous deux appeared until this 1956 Éditions du Cyclamen publication, accompanied by sixteen delicate drypoints by Gaston de Sainte-Croix, beautifully printed by Georges Viglino. The prints show a side of Sainte-Croix’s skills not seen anywhere other than here and in his illustrations produced a year later for Clayton’s College. They bear a close relationship with Jean Dulac’s later work, especially his Trente et quelques attitudes of 1952, so much so that Dulac’s prints may well have been a direct inspiration.

The Sainte-Croix-illustrated Nous deux was published by Éditions du Cyclamen in a limited numbered edition of 200 copies.