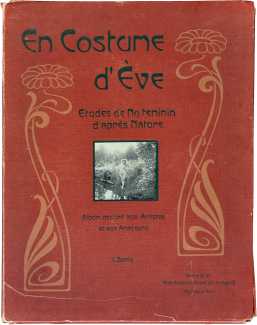 En costume d’Eve (In Eve’s clothing) is Series 26 of the La Librairie de L’estampe colour postcard sets, probably first published in 1916 and on sale throughout the 1920s.

In the period from around 1900 until 1930 ‘En costume d’Eve’ was a favourite euphemism for female nudity, the Bible’s first woman in her innocent natural state being the perfect excuse to display a few naked curves. In 1905 the Berlin photographic publishing company Richard Eckstein produced at least three portfolios titled En costume d’Eve, each containing twenty tasteful photographs of young naked women enjoying being outside in nature. Though published in Germany, they were mostly sold in Paris, the subtitle ‘Études de nu feminin d’après nature, album destiné aux artistes et aux amateurs’ (Studies of Natural Female Nudes, an Album for Artists and Admirers) being designed to make them more acceptable.

This series is one of the few times Suzanne Meunier painted completely naked young women, though taking care not to allow them to show the intimate parts that would create problems for the postal service.