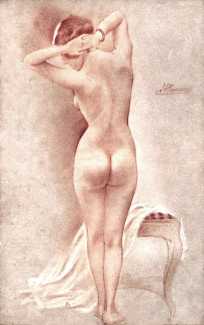 Études de nu (Nude studies) is Series 43 of the La Librairie de L’estampe colour postcard sets, first published in 1917 and on sale throughout the 1920s.

In one sense these are the most explicit images created by Suzanne Meunier during the most productive period of her artistic life, but at the same time they are also her most straightforward and honest depictions of naked young women, unfettered by fashion, artifice or innuendo. As she explained in her 1923 interview in Strand Magazine, ‘I have a deep love of beauty, and therefore I choose lovely models’; this popular set of postcards proves her point.

Rather than full colour, this series is printed in the ‘sanguine’ or deep blood red of Suzanne’s original pastel drawings.

In addition to being published by La Librairie de L’estampe, this is one of the few sets licensed in the mid-1930s by the New York agent Sydney Z. Lucas to an American postcard publisher, Carmen Guillard. Some rather bad American limericks were added to this edition, so it is probably a good thing that the license was short-lived and that war intervened: 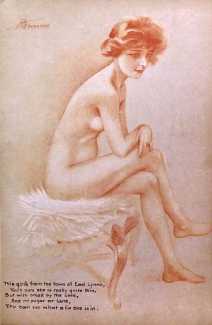 This girl’s from the town of East Lynn
You’ll note she is really quite thin.
But with bread by the card
And no sugar or lard
You can see what a fix she is in.