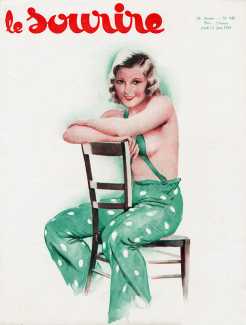 Le Sourire (The Smile) is a French magazine title with a long and fascinating history. Its first incarnation was in 1899, a monthly periodical published by the French artist Paul Gauguin which lasted for just nine editions until April 1900. A second version of Le Sourire began in August 1899 under Maurice Mery, who had experience in art review journals and newspapers. This weekly version came out on Saturdays under the editorship of Alphonse Allais. It suspended publishing with the advent of the First World War, but resumed in April 1917 with Rudolphe Bringer at the helm. It was on 3 May 1917, issue number 3, that Suzanne made her first Sourire appearance, with a drawing entitled ‘Petites femmes de guerre’ (Little Women of the War) on the central spread.

Le Sourire became well known for its risqué content, frequently featuring covers with pin-up style art and associated witticisms. It also had a distinctive graphic style including an Art Deco masthead and extensive use of coloured ink. After her first appearance in 1917 Suzanne continued to provide illustrations from time to time, then in the summer of 1923 she was contracted by the editor Louis Querelle to provide new material on a regular basis. By time she produced her last Sourire illustration in 1937 she had produced well over a hundred illustrations.

The first Meunier Sourire drawings feature a single young women, more or less dressed. The young woman is then accompanied by a sister, and in the Christmas 1926 number the centre spread is entitled ‘Avant son entrée dans la monde’ (Before Entering the World), featuring two women, one of whom is naked, wearing only makeup. Over the years more equivocal drawings venture towards a suggestion of lesbian intimacy, which has led some to wonder whether Suzanne approved of this trend in avant-garde Parisian circles.

Here we offer just a few of Suzanne Meunier’s contributions to Le Sourire, concentrating on her edgier illustrations, mostly from the mid and late 1920s.

Le Sourire continued to publish until the end of 1939, when Louis Querelle relaunched the magazine under the title Le Sourire de France.