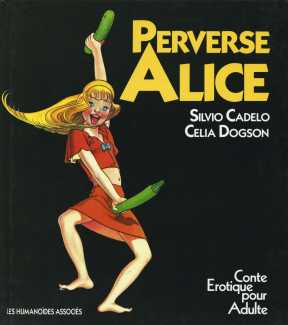 Forget the modern sexualised fantasies; Dodgson had plenty of his own, though it is fairly certain that despite his proclivity for naked children he never took physical advantage of them. One of his favourites was Evelyn Maude Hatch (1871–1951), an English child friend. She was the subject of a number of photographs by Dodgson, and is often part of the contemporary discussion about his relationships with young female children. She also acted as editor for a book of Dodgson’s letters after his death titled A Selection from the Letters of Lewis Carroll to his Child-Friends.

Dodgson often photographed Evelyn and her sisters, both clothed and naked; he was considered a family friend of the Hatches, and their mother had given permission to Dodgson to photograph the girls. Dodgson had a number of the photographs hand-coloured by his friend Anne Lydia Bond, depicting them as ethereal beings in fantasy landscapes.

Silvio Cadelo’s Alice is sassier and less demure, but just as fantastic. Drawn in bold colour, his Alice (and surely ‘Celia Dogson’ – get it? – is a Cadelo alter ego) knows how to operate in the topsy-turvy world of Perverse Alice. The White Rabbit gets to know Alice’s doll Dinah intimately, a reptilian by the name of Serpentine shows Alice how to use magic vegetables, and the Chauffeur with organ failure suggests she moves up from an ordinary bicycle to something a little speedier. Definitely, as the cover warns, a version of Alice for adults.