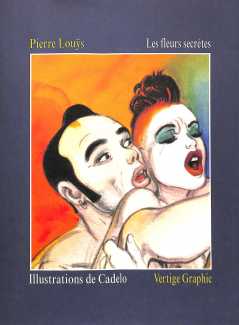 Apart from the Rojanesque uncle with a naked girl on his knee (illustrating ‘Hôtel-Restaurant’), the Japanese couple (‘Conseil’), and the breakfast-time blow-job (‘La prime’), all the illustrations feature the same three characters, two women and one man, enjoying a range of activities from solo sex with bananas to some exciting threesomes. Big boots are a unifying theme.

These Cadelo illustrations are quite different from most of his output, but are full of life and demonstrate to the full his artistic talent and imagination.

Les fleurs secrètes was published by Vertige Graphic in their Bibliothèque d’Éros series.