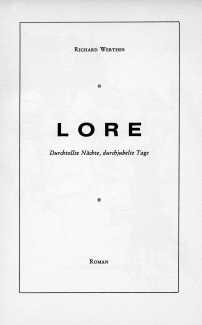 Lore was first published in 1908 as Durchtolle Nächte, durchjubelte Tage: Der Roman einer Berliner Lebedame (Amazing Nights, Wonderful Days: The Narrative of a Berlin Courtisan), and its author – Richard Werther is a pseudonym – is the same Ernst Klein as penned James Grunert. Like James Grunert, Lore was a commission from the well-known Berlin clandestine publisher Willy Schindler, and both books did extremely well for both author and publisher. Lore was resissued in 1918 as Lore: Das Liebesleben einer kleinen Berlinerin (Lore: The Love Life of a Little Berliner) and in 1921 as Liebesnächte: Geständnisse einer Berliner Fanny Hill (Nights of Love: The Confessions of a Berlin Fanny Hill).

Mazure/‘Charroux’ is in his element with the line illustrations to Lore, and much more at home with the 1900s than the 1780s.