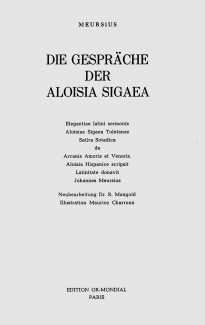 It first appeared as a work in Latin, which claimed that it was originally written in Spanish by Luisa Sigea de Velasco, an erudite poet and maid of honour at the court of Lisbon, then translated into Latin by Johannes Meursius, a humanist professor teaching history in Leiden, Holland. However, the attribution to Sigea was a lie, and Meursius’ involvement a complete fabrication. The manuscript circulated through the libertine community at the beginning of the eighteenth century, and was translated into French many times, including one by Jean Terrasson in 1750. It was also translated into English and German.

The book is written in the form of a series of dialogues with Tullia, a twenty-six-year-old Italian woman, the wife of Callias, who is charged with the sexual initiation of her young cousin, Ottavia. As Tullia explains, ‘Your mother asked me to reveal to you the most mysterious secrets of the bridal bed, and to teach you what you must be with your husband, which your husband will also be, touching these small things which so strongly inflame men’s passion. Tonight, so that I can teach you in a freer language, we will sleep together in my bed, which is of the softest of Venus’s lace.’

Maybe because this was the first of the Or-Mondial titles to be illustrated by Charroux, some of the illustrations are rather untidy; whether this is due to haste or to inexperience we shall probably never know.