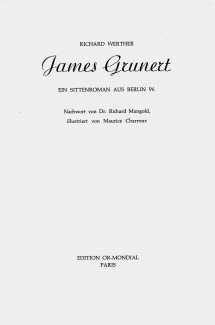 James Grunert, ein Sittenroman aus Berlin W (A Moral Tale from West Berlin) was first published privately in Vienna in 1908. It purports to be the frank memoirs of a young man from the finest Berlin banking family, who from boyhood on is besotted by the beautiful bodies of young women. It moves inexorably from childhood experiences of mutual caressing with young female friends to mature sexual awakenings in the salons of West Berlin.

The ‘Charroux’ illustrations for this edition of James Grunert demonstrate that the artist had now fully developed a mature pen-and-ink style, able to create a meaningful facial expression or background furnishing with the absolute minimum of strokes.