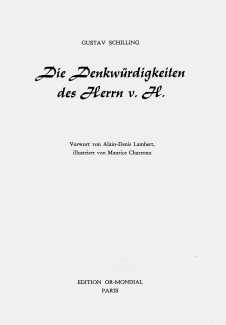 Friedrich Gustav Schilling (1766–1839) was a prolific German poet and essayist from an aristocratic Dresden family. His output included some eighty novels, and many short stories and poetry collections, but only one of his works has stood the test of time, his 1787 fictional memoir Die Denkwürdigkeiten des Herrn v. H. (The Memorials of Herr von H.).

Mazure/‘Charroux’ was now in his stride, illustrating the narrative with confident strokes of pen and brush. He had some issues reconciling eighteenth century costume and furnishings with 1960s women’s hairstyles, but managed to capture the energy of Schilling’s ever-popular text.