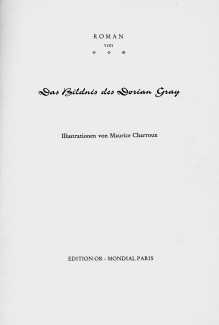 The text is a standard fictional memoir of a fin-de-siècle hedonist, well-written but no better than many. Its history, though, is interesting. The anonymous introduction to this edition explains that it is the first public outing of a text which remarkably survived over the decades, having been produced in the 1890s in only thirteen clandestine copies. Neither claim is true. It seems that the book was actually first published in France, for the entertainment of occupying German troops; copies exist with the Paris imprint of Les Découvertes Litteraires and dating from the late 1940s. Its author is not recorded.

Again the Charroux line drawings are accomplished and vigorous, the action clearly taking place in the 1960s rather than the naughty nineties.