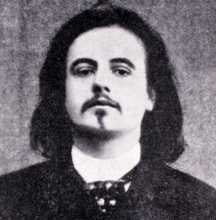 The French symbolist writer Alfred Jarry (1873–1907) is best known for his 1896 play Ubu Roi, work which reframes the bourgeoisie as the super-mediocre. Jarry coined the term and philosophical concept of ‘pataphysics’, which uses absurd irony to portray symbolic truths. Ubu Roi’s savage humour and monstrous absurdity, unlike anything thus far performed in French theatre, seemed unlikely to ever actually be performed on stage. However, theatre director Aurélien-Marie Lugné-Poe took the risk, producing the play at his Théâtre de l’Œuvre. On opening night, with traditionalists and the avant-garde in the audience, King Ubu stepped forward and intoned the opening word ‘Merdre!’. Pandemonium ensued, with outraged cries, booing, and whistling by the offended parties, countered by cheers and applause by the more degenerate contingent, and such interruptions continued through the evening. At the time only the dress rehearsal and opening night performance were held – the play was not revived until after Jarry’s death. 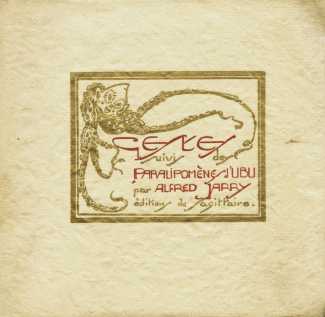 By the time Drains was commissioned to illustrate one of Jarry’s chaotic follow-up works, Gestes, suivis des paralipomènes d’Ubu (Gestures, Followed by Ubu’s Paralipomena), the anarchic writer had become a legendary heroic figure to many of the young writers and artists in Paris, including Guillaume Apollinaire and Pablo Picasso. Drains rose to the challenge of illustrating a madcap book which included wayward microbes, railway accidents and multiple appendices (including an appendix to the appendix), experimenting with colour, whole-page design and a gold-blocked cover to complement Jarry’s text. There’s also some rather gratuitous female nudity, which is our excuse for including this Drains-illustrated volume.

Gestes was published by Éditions du Sagittaire in a limited numbered and boxed edition of 1,000 copies.