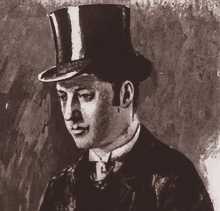 Jules Laforgue (1860–87) was a Franco-Uruguayan poet, often referred to as a symbolist, though critics and commentators have also pointed to Impressionism as a direct influence, so his poetry has been called symbolist-impressionist. Laforgue was a model for Pierre-Auguste Renoir, including for Renoir’s 1881 painting ‘Luncheon of the Boating Party’. Though sad, his early death from tuberculosis no doubt enhanced his romantic reputation.

Laforgue’s best-known work is probably his 1895 collection Les complaintes (The Plaints), which has been likened to a literary equivalent of the impressionism being explored in art and music of the period. The fifty poems include subjects ranging from ‘The Plaint of Difficult Puberty’ to ‘The Plaint of the King of Thule’, concluding with ‘The Plaint of Plaints’. 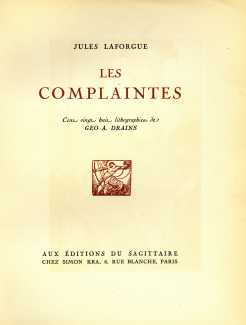 The Drains-illustrated Complaintes is a particularly sumptuous production, commissioned like the Jarry by publisher Simon Kra and editor André Malraux of the prestigious Éditions Sagittaire. Every poem illustrated is headed with a bi-colour engraving by Georges Drains, each consisting of a larger image with a smaller vignette, again showing how the artist was interested in experimenting with the juxtaposition of text, image and subject matter. The full-colour frontispiece includes a rather Ubu-like bass player.

Again, just enough nudity to justify including this fascinating portfolio …

This edition of Les complaintes was produced in a limited numbered edition of 500 copies.