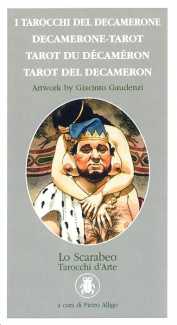 The Decameron Tarot was the fourth Tarot set designed by Gaudenzi for the specialist Italian playing card company Lo Scarabeo. The first was a Celtic Tarot published in 2000, a co-production with fellow artist Saverio Tenuta for which Gaudenzi created the 21 major arcana cards and Tenuta the others. This was such a success that Scarabeo went on to commission The Golden Dawn Tarot (Tarocchi del’ Alba Dorata) in 2001, and The Dürer Tarot, created in the style of Albrecht Dürer’s paintings and engravings, in 2003.

The Tarot set based on Boccaccio’s Decameron was finished three years later, and shows Gaudenzi at the height of his miniature format skills, intelligently and imaginatively showing his understanding of both the text and of its relationship with the themes of the Tarot. Each of the 78 cards, especially the 21 of the major arcana, is beautifully composed, providing plenty of inspiration for anyone using the pack for divination and guidance.

The images included here are deliberately low-resolution; the pack, together with full instructions, can be purchased directly from Lo Scarabeo’s website here, or through all the usual retail and online channels. Each card has Italian, French, English, Spanish and German text.