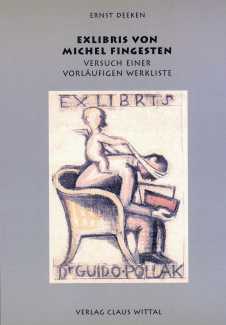 In 2000 the Ex Libris collector and champion of Fingesten’s work Ernst Deeren attempted a catalogue of Michel Fingesten’s bookplates – he included details of over 700 different Ex Libris plates and acknowledged that there were probably many more that have been lost to art history. The highly-original motifs show a clear influence of politics and eroticism, combined with a love of literature and music. The resulting bookplates may no longer be the useful, decorative book-owner’s marks they were designed as, but are still important works of art which tell us much about Fingesten and his artistic world.

Michel Fingesten’s ingenuity was boundless, even while working within severe spatial restraints, as the small bookplates were usually pasted on the inside front cover of the collector’s books. In Fingesten’s hands the bookplate transcends its utilitarian and decorative function, and becomes both a work of art in itself and a powerful expression of his relationship with the client and the social and sensual undercurrents of the time.