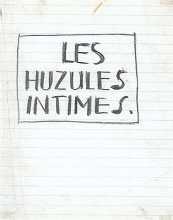 The Huzul people (sometimes also spelt Hutsul or Hutzul) are a mountain community centred in the Carpathian region around the borders of Ukraine, Poland and Romania, in the vicinity of Bojken and Lemken and in the wooded valleys of the Prut and the Czeremosz. During the First World War Austro-Hungarian armed forces set up a volunteer battalion made up of Huzuls, who were deployed on the Carpathian Front in the winter of 1914–15. After the collapse of Austria-Hungary in January 1919, the Huzuls proclaimed an independent republic. During a brief heyday in the early 1920s the predominantly-Huzul town of Rakhiv was sometimes referred to as ‘Huzul Paris’.

Kars encountered Huzul culture while stationed on the Eastern Front in 1916–17, and it seems was taken by their outdoor life and sexual candour, resulting in this sketchbook of Huzul intimacies. Whether these quick studies were made while on active duty or in a Russian prison is not known, but they bear the hallmarks of a Cubist artist longing to return to the freedom of Montmartre.