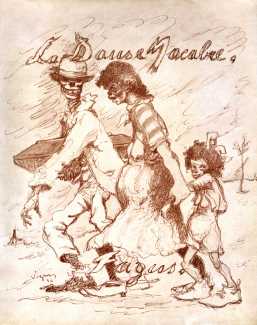 The only known book illustrations made by Sylvain Vigny are for a revised edition of the anarchist poet Georges Faillet’s (writing under the pseudonym Fagus) extended poem La danse macabre. Georges Faillet (1872–1933), anarchist, poet, literary critic – and town hall clerk – is now rather a forgotten minor genius, but his long poems are actually easy to read and very much of their time.

His friend Paul Léautaud describes him as ‘a little man stammering, zigzagging, limping, wearing an old-fashioned cap and big shoes, his pockets full of prints, hanging out in shops, distracted, absorbed, following one dream or another. But he was also a poet, a writer of a charming fantasy, a letter-writer full of verve, maybe a little mannered and precious to my liking, but with a great literary knowledge.’

La danse macabre, first published in 1920, was intended to be part of a much longer work entitled Stat Crux dum Volvitur Orbis (The Cross Stands while the World Turns), but only the first four parts – La danse macabre, Frère Tranquille, La guirlande à l’épousée, and Frère Tranquille à Elsinore, were completed before his untimely death, run over by a carriage while inebriated close to his home in Paris’s rue Visconti. Maybe fortunately only La danse macabre remained in print for any length of time, but its themes of longing, sex and death clearly struck a chord with Vigny. These forty illustrations made it into the revised edition of the book published in 1937, though the numbering on some of them suggest that he may have made considerably more, maybe as many as 150. 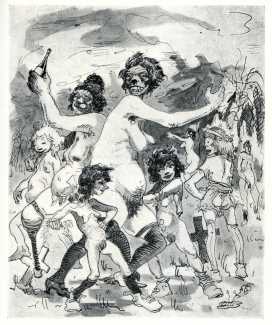 Sylvain Vigny’s drawings, in his trademark loose pen and wash style, are quite remarkable, even though the reproductions in the book do not do justice to the originals, probably lost forever. With a few deft strokes of the pen and ink washes he evokes real characters in believable situations, and what a variety of characters. He also has an uncanny ability to draw people – women anyway – both clothed and unclothed at the same time, a skill shared with very few other artists, notably Chas Laborde in his 1923 L’inflation sentimentale, which you can see here. Several of the plates feature naked groups of dancers, reminiscent of Martin van Maële’s La grande danse macabre des vifs, with which Vigny was no doubt familiar.

This edition of La danse macabre was published by Edgar Malfère, Paris, in a limited numbered edition of 2,125 copies.