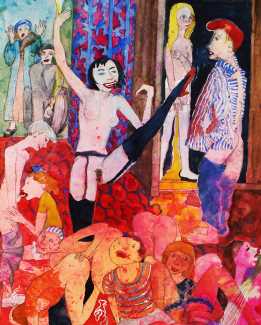 Bright colours provide a welcome foil to this potentially dark tale, which in Zirner’s hands becomes a place of play and exploration as much as pain and torture. In her mature imagination (these pictures were made when she was already well into her seventies) she sees sado-masochism as potential for freedom and self-exploration, much as Bataille intended. These are possibly the best and most appropriate illustrations that could have been created to accompany this classic of transgressive literature.