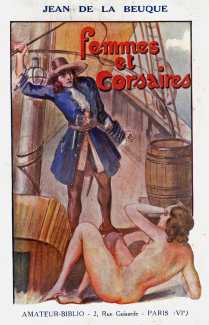 Femmes et Corsaires (Women and Pirates) was first published by Amateur-Biblio in 1926, and this illustrated edition followed five years later. The plates are unsigned, but there is general agreement that they are by the Smit-Topfer artist.

An extract from the book tells you all you need to know; the remaining 240 pages continue in a similar sadistic and racist vein. Interestingly, the main male sadist in the novel is called Ben Over, the same conceit as used half a century later by the English pornographic actor, director and producer Simon Honey, aka Ben Dover.

On an order from Ben, Juana’s two guards grabbed her again and began to brutally undress her, ripping off the clothes, cutting off what resisted despite the desperate efforts of the victim, who against all hope sought to resist. She writhed in all directions, struggling with fierce energy against the pirates who were trying to undress her. The shame of the approaching beating on her naked flesh, the prospect of being beaten, whipped like a reluctant and mean animal, caused a brief flush of fear to pass through, increasing her strength tenfold.
Ben Over and Joaquin, also armed with a sabre, seemed delighted, and a sinister smile passed over their fierce faces as the woman was gradually overpowered. Now Juana was completely naked, panting, bruised, dishevelled, still struggling in the hands of the pirates who held her firmly.
She was led to the foot of a mast, arms tied as if to hug it, face against the timber, offering the nakedness of her shoulders, her breasts, her rump to her tormentors. Dolores and Conception were dragged a few steps away from their sister, who was about to be flogged in front of them, powerless.
Suddenly a hoarse cry rose from the girl. On poor Juana’s bare shoulders a livid stripe appeared, together with a pattern of dark red spots. From the outset, the thongs, tied in a bundle, had served their purpose, deeply penetrating her skin, sinking painfully into the juvenile flesh.