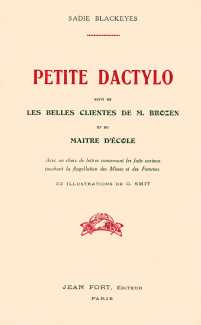 Petite dactylo (The Little Typist), first published by Jean Fort in 1914 and here reprinted in his Collection des Orties Blanches (White Nettle Collection), is set in a typing school with a method of correction that long predates Tippex. Its author, here writing as Sadie Blackeyes, was Pierre Mac Orlan. Born Pierre Dumarchey (1882–1970), Mac Orlan was a leading French songwriter and novelist whose work included Quai des Brumes (1928): filmed by Marcel Carné in 1938 and starring Jean Gabin, it remains one of the enduring cornerstones of French cinema.

It is this edition of Petite dactylo that most strongly suggests a link between ‘Gaston Smit’ and Louis Malteste, as the illustrated second title page bears Malteste’s signature in a remarkably similar style to the G. Smit signature on most of the plates. However, the Malteste-signed drawing is noticeably better than the others, so maybe most are by an unknown ‘Smit’ apprentice.