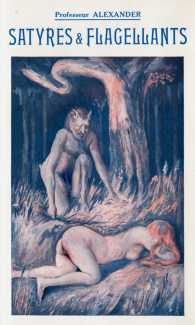 Satyres et flagellants (Satyrs and Flagellants) by Professeur (Max) Alexander is one of several volumes produced in the early twentieth century which attempted to give some degree of historic and pseudo-academic background to sadomasochistic practices. Quoting sources from Gallus and Pliny to Rousseau, the learned professor (using a pseudonym used only in this volume) explains the psychology and biology underlying such conditions as oestromania, erotomany, continence and genital excitability in a series of ‘lustful tales which will amaze the reader with their horrors and quirks’.

Satyres et flagellants was first published in 1909, this illustrated reprint being produced by the Librairie Artistique et Édition Parisienne Réunies. Unusually, plates from this edition bear both ‘Smit’ and ‘Topfer’ signatures.

When Steve Mullins acquired this copy of Satyres et flagellants, he was surprised by the explicitness of several of the drawings. ‘I cannot ever remember seeing any depiction of pubic hair in books of this period,’ he wrote, ‘and most definitely not a depiction of a vagina. This little volume has both. Such images are commonplace in clandestine erotica, but not so in flagellation novels which were not illegal or subject to prosecution when originally published.’ The mystery is solved when the relevant images are examined closely – the satyr’s erect penis on the title page, the pubic hair, and the detailed vulvas on the cover and the final plate have all been carefully added by hand to the original illustrations, so convincingly that it is very easy to miss the augmantation.