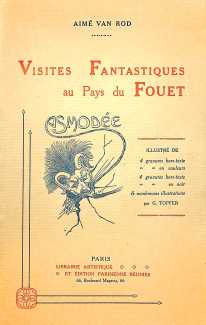 Aimé van Rod (‘Whip-lover’ in French) was the pseudonym of the author of more than thirty sadomasochistic novels between 1907 and 1915, starting with Nos belles flagellantes (Our Beautiful Flagellants) and bowing out with Grace Rod a dozen years later. But that wasn’t the end of Aimé, as the van Rod novels continued to be reprinted, often with new titles and illustrations, throughout the 1920s and early 30s. Nobody knows the true identity of Aimé van Rod, who may well have had more than one real-life existence.

Visites fantastiques au pays du fouet (Fantastic Visits to the Land of the Whip), first published in 1910, is one of van Rod’s most original texts. More than just an fetishistic, sadomasochistic novel fetishistic, it also includes some intriguing fantasy elements. The book begins with the visit of Asmodée, ‘the devil on two sticks’, to the rich banker Haltmayer, who has been daydreaming of whipping the buttocks of some unruly suffragettes. Perceiving Haltmayer’s fantasies, Asmodée arrives through his window and proposes a trip on his back hairy. Heading for England, known for the harsh upbringing of girls in boarding schools, Haltmayer rejoices, hoping to witness scenes of flagellation and humiliation that will delight his perverse desires. Better to enjoy the show, the two voyeurs are invisible; they can pass through walls unobserved, and even read the thoughts of the protagonists.

The illustrations to this edition, published by the Librairie Artistique et Édition Parisienne Réunies, are a very mixed bag, and some of the earliest known signed ‘G. Topfer’. Four in colour, four in sepia, several full-page halftones and a number of smaller line drawings pepper the text, and though some are clearly created to illustrate the narrative, many are generic and are probably reused from other titles.

Interestingly, the majority of flagellation novels avoided prosecution at the time they were published, because they carefully avoided actual genitals and sexual activity in the illustrations, but they did become the focus of prosecution in the 1950s. Visites fantastiques au pays du fouet was no exception, being sentenced by the 10th Chamber of the Seine Correctional Court on 8 May 1950, by the Paris Court of Appeal 10th Chamber on 27 October 1953, by the 17th Chamber Correctional Court of the Seine on 25 November 1953, and by the Paris Court of Appeal 10th Chamber on 9 June 1954. By this time, of course, such judgements were virtually meaningless as the book had been out of print for decades.