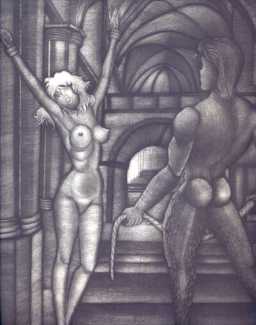 L’histoire de l’oeil was originally published in 1928, but it was not until the early 1940s that clandestine copies began to appear more widely; it was censored until the 1950s and appeared in English translation only in 1953. Narrated by an unnamed young man looking back on his sexual exploits, L’histoire de l’oeil describes the perversions of a pair of teenage lovers. Simone is his primary female partner, but the narrative includes two important secondary figures, Marcelle, a mentally ill sixteen-year-old girl who comes to a sad end, and Lord Edmund, a voyeuristic English émigré aristocrat. Though often portrayed as pure pornography, interpretation of the story has gradually matured to reveal considerable philosophical and emotional depth, its imagery built upon a series of metaphors which in turn refer to philosophical constructs developed in Bataille’s wider work on the erotic, including the eye, the vagina, the anus, the testicle, the egg, the sun and the earth.

Katharina Kranichfeld’s Das Auge combines elements from Bataille with half-remembered scenes from her own youthful experience, including fierce fairy-tale wolves, malevolent priests, and many forms of torture. The all-seeing eyes are everywhere.

Das Auge consists of three portfolios each of ten etchings; here we have combined all of Kranichfeld’s ‘eye’ prints.