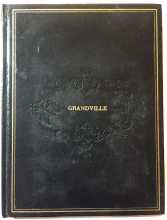 The relative crudeness of the illustrations have led some to believe that this is a nineteenth-century Grandville spoof, especially since nothing else quite so explicit of Grandville’s is known. Still, an old joke (‘I am a famaus [sic] cock’) can still be a good joke, and there are several classics here.