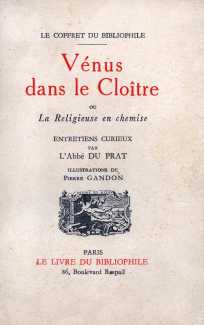 Vénus dans le cloître is another text which lends itself well to an illustrated reissue, in this case by Le Livre du Bibliophile in 1962, a very late date for such an ‘antique’-looking volume. Gandon’s two-colour engravings show him to be a skilled illustrator, a fine judge of breast and female bottom.