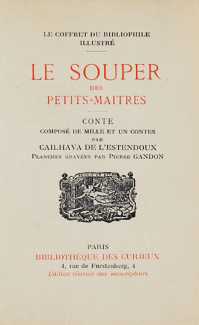 Le souper des petits-maîtres (The Grandmasters’ Supper) is a light-hearted drama written by the French dramatist Jean-François Cailhava de L’Estandoux (1731–1813), who was born in Estandoux near Toulouse, and elected as the ninth occupant of Académie Française seat 29. He wrote dozens of short, witty plays which were very popular in the late eighteenth century, and collected in five volumes in 1803.

Le souper des petits-maîtres, published in 1770, is L’Estandoux’ only prose work, a series of amorous tales perfect for illustration in the ‘galante’ style, a commission to which Pierre Gandon arose admirably when it was reissued by Bibliothèque des Curieux in 1934. The subtitle, Conte compose de mille et un contes, is an attempt to compare L’Estandoux with the more famous anonymous author of the Arabian Thousand and One Nights.