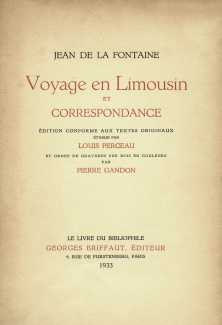 In 1658 the famous French poet and fabulist Jean de la Fontaine entered the service of Nicolas Fouquet, the Superintendent of Finance. It turned out not to have been a very wise choice, as four years later Fouquet was arrested on the orders of Louis XIV, just a day after a sumptuous party that Fouquet had organised in his castle of Vaux-le-Vicomteand, which La Fontaine had attended and very much enjoyed. We do not know whether La Fontaine’s trip to Limousin in 1663 was the result of an exile ordered by the administration of Louis XIV, or a freely-made decision; whatever the reason, he wrote an entertaining travelogue in the form of letters in verse and prose addressed to his wife, which was published posthumously. This 1933 edition, published by the prestigious Paris publisher Georges Briffaut, was a carefully-edited compilation with an introduction by the poet and literary critic Louis Perceau.

Briffaut commissioned Pierre Gandon, who had still to become recognised as an engraver of exquisite miniatures suitable for stamp designs, to produce a set of coloured woodcuts for Voyage en Limousin. The result was some of the best book illustrations produced by this multi-talented artist.

The Gandon-illustrated Voyage en Limousin was published by Briffaut in a limited numbered edition of 915 copies.