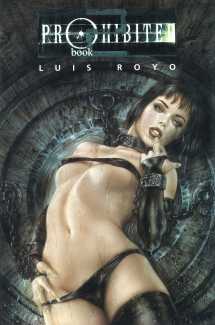 The second Prohibited volume appeared a year after the first, and is generally considered by Royo aficionados to be the best of the trilogy, possibly because it contains the extended narrative series of artworks which, with its accompanying text, is entitled El Príncipe Azul (The Blue Prince). Based loosely on the traditional Bluebeard, it takes a typically young and beautiful Royo heroine through a predictable but powerfully-drawn disrobement and seduction by a grotesque but rather engaging monster. The Príncipe Azul paintings are a good example of Royo working with a limited colour palette to striking effect.

As with Volume 1, we have only shown here a selection of images from the book; if you want to see them all you will need to locate an increasingly rare copy on the second-hand market.