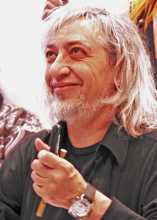 The success of Spanish artist Luis Royo is due largely to the originality of his work, which has broken through traditional barriers and revolutionised the world of fantasy illustration. Though he has experimented with other themes like the western, historic epics, and romance, it is his photorealistic depictions of worlds of dragons, monsters, unicorns – and uniformly beautiful and usually naked or semi-naked young women – for which he is best known.

Luis Royo was born in 1954 in Olalla, a small village in Teruel, Spain. As a child, he moved to Zaragoza where he studied technical design, painting, and interior design. He began working as a furniture designer, but was attracted to comics by the work of artists like Enki Bilal and Moebius, and in 1978 he turned to art as a full-time career. Within a few years, his work was appearing regularly on the covers of such magazines as Comix Rambla Internacional, El Vibora, Heavy Metal, National Lampoon and Comic Art, and he was providing cover illustrations for several American publishers.

In 1983 he moved into book illustration, which is where he produced his greatest achievements. In 1992 his first book, Women, appeared, followed by Malefic (1994), Secrets (1996), III Millennium (1998), Dreams (1999), Prohibited (1999–2003), Evolution (2001), Conceptions (2002–3), and Visions (2003). Along with the books came six collectors’ cards series, five collectors’ portfolios, posters, and a tarot card set, The Black Tarot. The increasing popularity of Royo’s images led to the publication of postcards, calendars, playing cards, t-shirts, album covers, video games, mouse pads, and even sculpture.

Royo’s books have gone through numerous editions and have been translated into French, English, Italian, Russian and Portuguese. Magazines including Stampa, Airbrush-Action and Penthouse have dedicated articles to him. He has received the Spectrum Silver Award (United States), Cartoomics (Italy), and the Pilgrim Prize (Russia), amongst many others.

Royo’s innovative style combines graphic power with a fragile, almost mystic transparency. His women, while young and conventionally beautiful, are mostly in control of their encounters with beasts of various sizes and colours. And it is his use of colour, from the most saturated to the most monochrome, which creates an aura of fascination that invites his readers to enter his worlds.

Despite the consistent use of certain elements, Royo’s style reflects a clear evolution. When reviewing his work chronologically, there is a refinement in his style as each volume of paintings becomes ever more poetic and graceful. His permanent position on the front line in the world of illustration is the result of his constant, subtle and effective experimentation. Royo has made much of the myth of Beauty and the Beast, effortlessly moving from the lyrical to the horrific, between epic and erotic. As Royo knows well, when the dark ghost of death looms over the hero, the implications of power and sex become ever more intense.

In recent years his book work has continued to flourish, with new collections including Dead Moon (2009–10), El Paso del Tiempo (2011), and Goddesses and Custom Made (2019). In 2007 he created a domed ceiling painting in Russia 24 meters in diameter, where more than forty life-size female figures play with architecture; this was documented in his book Dome. And in 2011 he illustrated George R.R. Martin’s book The Ice Dragon.

Luis Royo’s official website, with much more information and many art examples, can be found here. 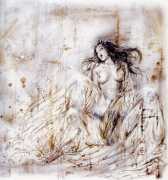 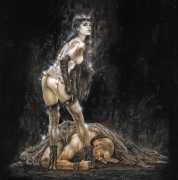 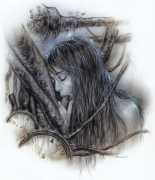 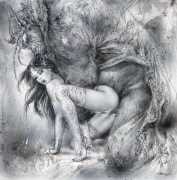 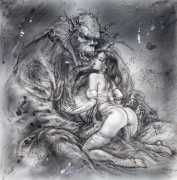 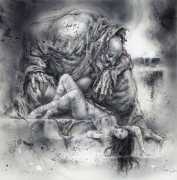 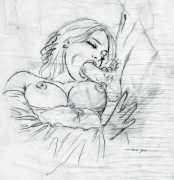 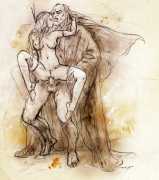 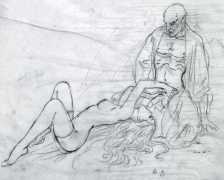