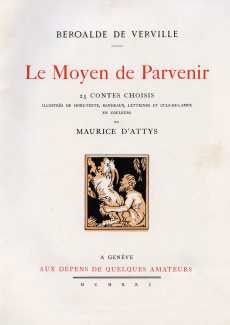 François Béroalde de Verville (1556–1626) was the archetypal French Renaissance man – a novelist, poet, translator and intellectual who could turn his mind and pen to almost any subject known to civilisation. Béroalde had close ties to the intellectual and creative milieus of the late sixteenth century and early seventeenth century, and was under the protection of two Conseillers du Roi. His writings cover topics as varied as history, mathematics, optics, alchemy, medicine, painting, sculpture, love – and silk. He wrote in both verse and prose, and in all manner of tones, satirical, moral, spiritual, philosophical and political. Béroalde represents a literature of transition from the Valois court to the Bourbon court of Henri IV and the baroque, and like his contemporary Nicolas de Montreux he attempted to compete with the translation of foreign masterpieces by the creation of original works in French.

Béroalde’s most famous work is the playful, chaotic, baroque, sometimes obscene and almost unreadable Le moyen de parvenir (literally Ways to Get Ahead), first published around 1617, in which a host of famous individuals including Rabelais and de Montaigne debate, discuss and joke – frequently with much coarse humour – matters historical, political and philosophical.

Le moyen de parvenir includes much ribaldry, rudeness and embarrassment, themes which de Becque – here as Maurice d’Attys – develops to the full. The dark backgrounds laced with gold decoration are a de Becque speciality, linking the illustrations thematically and decoratively. Many of the chapter headers and tailpieces are as interesting in their detail as the full-page plates, using a limited colour palette to its full potential.

Le moyen de parvenir was published ‘Aux dépens de quelques amateurs’ (at the expense of a group of collectors) in a limited numbered edition of 300 copies.