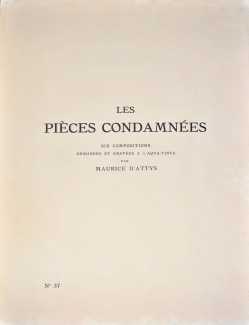 Charles Baudelaire’s Fleurs du mal (The Flowers of Evil) was first published in 1857, but neither of the first two editions included the six poems known as Pièces condamnées (The Banned Poems), which were omitted at the demand of the French government censors. The ‘forbidden’ poems (‘Lesbos’, ‘Femmes damnées (à la pâle clarté)’, ‘Le Léthé’, ‘À celle qui est trop gaie’, ‘Les bijoux’, and ‘Les métamorphoses du vampire’) appeared in print in 1866, but were officially banned in France until the 1940s because of their lesbian and sado-erotic content.

This made the Pièces condamnées particularly attractive to publishers of limited illustrated editions. The first portfolio specifically of Pièces condamnées images, by Jean Gabriel Daragnès, appeared in 1917 (you can see it here), to be followed five years later by de Becque’s interpretation. The de Becque Pièces condamnées was a very small edition, each of the six plates being produced in three states, one in sepia liner, one in black and sepia, and one in full colour; we have included all three states.

Les pièces condamnées was privately published in a limited numbered edition of 52 copies.

We are very grateful to Anna Balagué Moreno of Llibreria Balagué in Barcelona  for sharing these images with us.