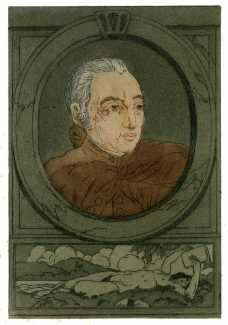 Between 1794 and 1797 he wrote the sixteen volumes of Monsieur Nicolas ou le coeur humain dévoilé (Monsieur Nicolas, or the Human Heart Unveiled), including his memories, his thoughts about ethical and social points, his hatreds, and above all his numerous loves, both real and fancied. He is particularly vivid in his descriptions of his early sexual awakening, women’s clothes and particularly their shoes being especially powerful, such that he is often cited as the first recorded shoe fetishist.

Fortunately for the reader, the de Becque-illustrated Monsieur Nicolas only recounts ‘quelques amours’, some of his numerous loves, including his childhood sweethearts Toinette and Marote, and his grand amour, Agnès Lebègue.

De Becque is credited for the Réstif illustrations under his real name. They show a development in his style towards a more adventurous use of colour, often at the darker end of the spectrum. As with all his work, they merit a close look at the detail, which at first glance often seems lost in the shadows.

Quelques amours de Monsieur Nicolas was published by the Paris publisher Baudel, in a limited numbered edition of 400 copies.