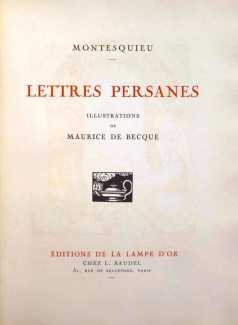 Lettres Persanes (Persian Letters) was written in 1721 by Charles de Secondat, Baron de Montesquieu, recounting the experiences of two fictional Persian noblemen, Usbek and Rica, travelling through France. In 1711 Usbek leaves his seraglio in Isfahan to take the long journey to France, accompanied by his young friend Rica. He leaves behind five wives – Zashi, Zéphis, Fatmé, Zélis and Roxane – in the care of a number of eunuchs, one of whom is the head eunuch. During the trip and their long stay in Paris, they comment, in letters exchanged with friends and mullahs, on numerous aspects of Western, Christian society and French politics. Over time, various problems surface back in the seraglio, and the situation there rapidly unravels. Usbek orders his head eunuch to crack down, but his message does not arrive in time, and a revolt brings about the death of his wives, including the vengeful suicide of his favorite, Roxane, and, it appears, most of the eunuchs.

Maurice de Becque, again credited under his own name for the Lettres Persanes illustrations, takes the opportunity to imagine the scenes in the Isfahan seraglio, with plenty of opportunity for nudity.

Lettres Persanes was published by Baudel’s Éditions de la Lampe d’Or in a limited numbered edition of 1,300 copies, of which the first 300 included the suite of illustrations in colour.