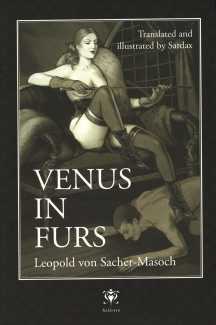 It seems strange that while the Marquis de Sade’s works have inspired so many artists and illustrators, the equivalent books of the man who gave masochism its name – Austrian author Leopold von Sacher-Masoch – have resulted in so few creative endeavours. In one of his most recent portfolios, accompanied by his own new translation, Sardax has made good that omission with ten powerful colour illustrations for an English edition of Venus im Pelz.

Here is an extract from Sardax’s excellent new translation:

The bathroom was a broad, high rotunda. The pale light fell peacefully from above through the red glass dome. The broad leaves from two palms formed a canopy overarching a day bed with red velvet cushions, from which steps covered with Turkish carpets led down to the broad marble pool in the middle.
‘Above on my bedside table is a green ribbon,’ said Wanda, reclining on the day bed, ‘Bring it to me – and also the whip.’
I flew up the stairs and returned, knelt and placed both in the hands of the Mistress. She had me lift up her sumptuously thick hair into a large knot and secure it with the green velvet ribbon. Then I prepared the bath, proving quite clumsy in doing so, for my hands and feet refused to do their duty.
I was compelled to look at this beauty lying on the red velvet cushions; it was not my will to do so – it drew me like a magnetic force. Whenever I did so I felt that all lust and lasciviousness lies in the arousal caused by half-undress and disrobing, and I felt it even more when the pool was filled and Wanda threw off her fur with one motion and stood before me like the goddess in the Tribuna.
In that moment she seemed to me in all her unrobed beauty so divine and pure that, just as before with the goddess, I fell on my knees before her, and reverentially pressed my lips on her foot. My soul, which before was inundated by such wild passions, now became suddenly calm and even Wanda could not feel cruelty to me. She slowly descended the steps and I could watch her with a quiet joy, unmixed with any trace of longing or torment. She bobbed up and down in the crystalline waters and the waves that she provoked seemed to play amorously around her. Our nihilist aesthetician is correct. A real apple is more beautiful than one depicted and a living woman more fair than a Venus of stone. As she then climbed out of the bath and the silvery drops trickled down her in the rosy light I fell into a speechless ecstasy. I wrapped her in linen and dried her magnificent body and that quiet bliss remained with me, as she again rested in her large velvet-lined coat on the cushions, with one foot on me as if on a stool. The undulating sable fur hugged her cold marble-like body tightly and the left arm on which she rested lay in the dark fur of the sleeve like a sleeping swan while her right hand played casually with the whip.
Quite by accident, my glance fell on the massive mirror on the wall opposite and I gasped as I saw both of us pictured together in a golden frame. The picture was so wonderfully beautiful, so strange and fantastic that I was seized by a deep sadness that its lines and colours should disappear like the mist.
‘What is it?’ she asked.
I pointed to the mirror.
‘It is really beautiful. Such a shame one cannot hold onto the moment.’
‘And why not?’ I asked, ‘would not any artist, even the most famous, be proud if you allowed him to immortalise you through his paintbrush? The thought that this exceptional beauty,’ I continued, looking at her with enthusiasm, ‘the wonderfully formed face, remarkable eyes with their green fire, its demonic hair and bodily splendour – that all this should be lost to the world is terrible to me. It grips me with all the horror of annihilation and death. The hand of an artist should rescue you – you should not be submerged like all the rest of us and forever, without leaving a trace of your existence behind.’

Information about how to buy Venus in Furs can be found on the Sardax website.