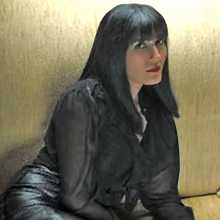 In late 2010 the fashion designer Afira Khan met Sardax at a dinner party; as they talked they realised that they had many ideas in common about how women inhabit the world, and they decided to work together towards an exhibition to be staged during the London Fashion week in February 2011. The result was an arresting series of images which combines Sardax’s vivid images of female domination with the clothing from Afira’s Dark Daze collection.

The London-based Don’t Panic magazine interviewed Afira about the connection and her thoughts about working with Sardax.

Tell us about the narrative behind these images – is there a story that links them together?

There is no traditional, linear narrative, though you are welcome to find one that makes sense for you. But the collection does tell a story of a kind, involving a woman taking the structures of oppression and reimagining them as expressions of her power. I see Sardax’s interpretations as fantastic wild flowers which spring up unexpectedly in my carefully nurtured garden.

Most of Sardax’s fan-base is male, but he is as happy for women to enjoy his art as I am for men to enjoy my clothes.

So what do you think your customers will see in these pictures? Is it different from what Sardax’s followers will see?

I hope my customers will see images of women experimenting with, enjoying and flaunting their sexual power. I can only imagine that Sardax’s fans will see the same, perhaps from the very particular perspective of men who adore that power in women.

Your website says ‘Strong, powerful and sexy women are my inspiration, and my customer. They don’t dress for men, or other women, they dress for themselves. Afira captures the essence of timeless beauty for the woman who is passionate, feminine, and provocative, releasing the femme fatale in all of us.’ You could argue that the femme fatale is all about dressing for men, as she gets her power by using male desire to victimise men. Is that what women want?

My collection enjoys the archetype of the femme fatale, and I hope creatively explores that. It’s not about victimising men, rather about celebrating women. That is Sardax’s perspective too. I don’t think the Sardax images are about victimisation – the men are willing subjects in a consensual power exchange.

How do you think women want to interact with men?

We want to be accepted on our own terms, of course. My designs, I hope, are part of a bigger cultural project in which women are reframing the picture of how women and men relate. A woman wearing my clothes is administering a shocking jolt of perspective when she enters a room. You can’t just look through her, past her or around her. She has to be recognised, acknowledged, accommodated. What she does with that recognition is then down to her. My designs are made to help her grab that initial space.

Are strength and dominance the same thing?

A good question. Even in this relatively advanced and liberal society, a strong woman can be rather challenging. So our vulnerability is sometimes mistaken for weakness. In fact it’s the source of our power. You can be strong without being dominant, I’m not sure however that you can be dominant without being strong. Some weak types try, but being loud or being a bully is not being dominant. It can be the quietest person in the room who dominates it, and often that’s a woman.