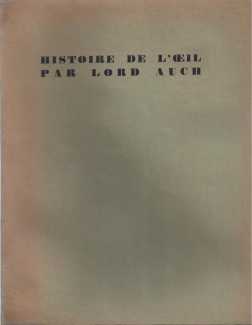 It was some time in 1927 that good friends André Masson and Pascal Pia had the idea of a collection of erotic works, with the publisher René Bonnel taking charge of the clandestine printing. Masson recruited his friends Louis Aragon and Georges Bataille as authors. After Aragon’s Le Con d’Irène (Irene’s Cunt), Histoire de l’oeil (Story of the Eye) was the second work in the collection, written by Bataille under the pseudonym Lord Auch. Like Aragon and Irène, Bataille was at pains not to reveal his true identity as author of Histoire de l’oeil, though just before he died he did explain (under another pseudonym, Louis Trente), that ‘Lord Auch’ was chosen as a cryptic translation of ‘God relieving himself’, ‘auch’ being an abbreviation for ‘aux chiottes’ – in the toilets. Due to the intervention of the Paris police, the series never went beyond two volumes.

Narrated by an unnamed young man looking back on his exploits, Histoire de l’oeil describes the sexual perversions of a pair of teenage lovers. Simone is his primary female partner, but the narrative includes two important secondary figures, Marcelle, a mentally ill sixteen-year-old girl who comes to a sad end, and Lord Edmund, a voyeuristic English émigré aristocrat. Though often portrayed as pure pornography, interpretation of the story has gradually matured to reveal considerable philosophical and emotional depth, its imagery built upon a series of metaphors which in turn refer to philosophical constructs developed in Bataille’s wider work on the erotic, including the eye, the vagina, the anus, the testicle, the egg, the sun and the earth.

Like the text, the eight lithographs accompanying the first edition of Histoire de l’oeil were anonymous, though Masson was less concerned than Bataille about being identified. The collaboration cemented the relationship between author and artist; for reasons linked to their respective life experiences, the two men shared the same questioning, tinged with fascination, about human cruelty. Masson’s images for Histoire de l’oeil are nervous and tormented, complementing Bataille’s study of eroticism and perversion.

Just 134 numbered copies of the first edition of Histoire de l’oeil were produced, with no indication of place of publication or publisher’s details.