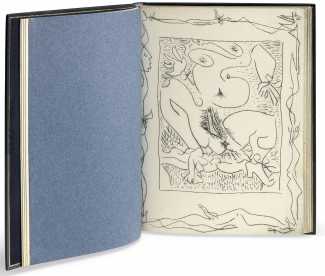 Though he was a passable poet and artist, Benoit’s lasting legacy us as a collector of rare and precious books, many of them signed limited editions, and of original artworks. He left his collection of works of art to his home town, Alès in southern France, which installed it in the Pierre-André-Benoit Museum and Library, and his literary collections to the Biblioteque Nationale de France.

Masson’s engravings for Ainsi de suite show him exploring in his trademark sinuous style the theme of naked bodies, especially genitalia, which had started in earnest with Con d’Irène and Histoire de l’oeil.