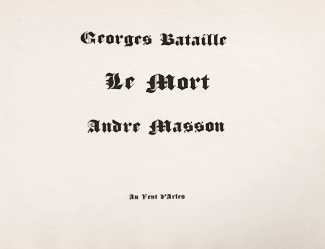 Le mort (The Dead Man) is the briefest and undoubtedly the darkest, the most scandalous and obscene – ‘of a very bad kind’ in his own words – of Georges Bataille’s stories. Its brevity, 28 chapters of one page each, serves to accentuates its intensity and power, the excess of desire mingling with the fascination of horror in a balance of passion and animality.

It was written between late 1942 and early 1944 (Bataille himself is imprecise as to the exact dates), but remained unpublished in the lifetime of the author. It was first published, with his friend Masson’s powerful colour engravings, twenty years after it was written.

The story, which takes place against a backdrop of a storm and a muddy countryside, opens with the words ‘When Edouard fell back dead an emptiness opened inside her, a prolonged shudder went through her, and bore her upward like an angel. Marie’s bare breasts were rising in a church seen in a dream where the feeling of the irreparable was draining her, Standing by the dead man, gone, transported, overcome in a slow ecstasy, smitten. She knew herself to be desperate, but she was throwing her despair to the winds. As he was dying, Edouard had beseeched her to take off her clothes.’ Now he is dead Marie tears off her dress and flees naked into the street; she finds himself in an inn filled with whores and drunkards. There, during a night of debauchery, she indulges in lust, gets drunk in the company of farm boys, and gives in to erotic excesses with  the valet Pierrot and a dwarf ‘with the silhouette of a rat’, before she herself dies.

Le mort has a strong autobiographical element; Bataille wrote the story while suffering from tuberculosis in the Normandy village of Panilleuse. The inn of the story, Quilly, alludes to that of Tilly near Panilleuse. As he wrote in the manuscript of a draft preface, ‘There is the closest connection between Le mort and my stay in Normandy’. Bataille also wrote of the extreme emotional condition and state of mind in which he wrote this text: ‘I was ill, in a dark state of depression, horror and excitement; my mistress, a beautiful girl, lived not more than a kilometer away, but we could not see each other’.

André Masson’s engravings for Le mort are some of his best work, well worth careful attention. Marie’s tortured excesses, fuelled by religious fantasy and sexual longing, are given full rein in Masson’s expressive compositions. They are a true and powerful tribute to the memory of one of his closest friends.

The best English translation of The Dead Man is by Austryn Wainhouse, in a Penguin Modern Classic which also includes Madame Edwarda, and critical essays by Yukio Mishima and Ken Hollings.

Le mort was published by Au vent d’Arles in a limited numbered edition of 145 copies.