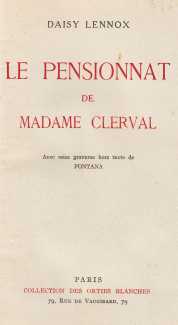 Madame Clerval, barely 32 years old, was in the full maturity of her brunette beauty. She did everything for the two young girls, combing their hair and making their braids. She began to undress. She even took off her stockings, saying to Marguerite: ‘Now, I'm going to lie down on the edge of the bed; you'll give me a dozen slaps on the buttocks, as hard as you can, and then I'll tell you what I want. Don’t be afraid to hit hard.’

And so Mme Clerval introduces her charges to the joys of spanking, in a typical anonymous (‘Daisy Lennox’ is of course a pseudonym) 1930s sadomasochistic frolic from the Jean Fort stable. Fort was a prolific producer of erotica under a variety of imprints, his Collection des Orties Blanches (The White Nettle Collection) specifically dedicated to stories on a spanking theme. Between 1920 and 1939 Fort produced a very large number of titles under this imprint, illustrated by various artists, again mostly working anonymously.

Le pensionnat de Madame Clerval is unusual in that the identity of the illustrator is known – Léo Fontan working under the name ‘Fontana’. As far as we know Fontan only illustrated two sadomasochistic texts, the other, also in the Orties Blanches series, was René-Michel Desergy’s Chambrières de haute école (High School Chambermaids) in 1934, which you can see here.