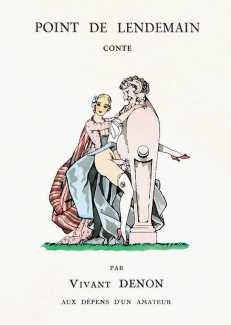 The Fontan illustrations for this edition of Point de lendemain are the most explicit of any of his work, the composition and colouring demonstrating his skill at combining sex and artistry.

Point de lendemain was privately published ‘Aux dépens d’un amateur’ (at the expense of a collector) in a limited numbered edition of 220 copies.